What is Flutter? Advantages & Disadvantages of Flutter 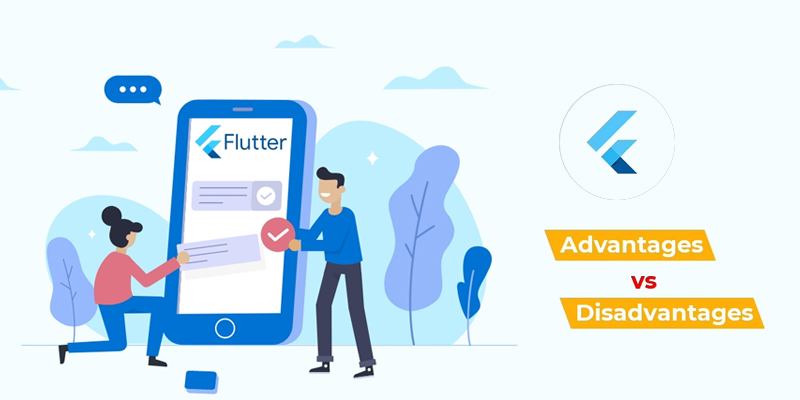 In the digital age where apps are the most preferred way to grow and promote the business, its development is also gearing the pace. Various technologies have been adopted to accommodate cross-platform mobile applications. One of the trending apps among all is Flutter.

Being a complete SDK – Software Development Kit, Flutter is an open-source and free technology developed by Google for creating Android and iOS apps with a single codebase.
It is based on Dart programming language and is equipped with a rendering engine, ready-made widgets, testing and integration APIs, and command-line tools.

Flutter is a cross-platform solution, makes it easier for one codebase to run on both Android and iOS. This saves a lot of development time. You don’t need two teams working on the code for a single platform which in turn saves efforts and money. Thus, using flutter is quite economical and app development is speedier via it.

This is a unique feature of flutter. Any changes that a developer does while developing will be instantly and easily seen in the app. This will simplify detecting bugs as the developer will be able to see the change on the go. This feature also aids the developer to experiment with new features and improvise the overall working of the app.

The apps you create in Flutter are very smooth and seamless, i.e., they don’t hang or cut while scrolling, hence a better overall performance is guaranteed.

Flutter supports immediate updates on both the platforms – ios and android simultaneously. This enhances productivity and allows you to fix errors if any without restarting and with ease.

Built with an incredible internal graphics engine, curating attractive & appealing custom UI elements is easy on Flutter and is supported on both Android and iOS platforms.

Flutter supports Dart programming language. Ones who are not acquainted with the language or need to learn it for development can easily do so as Dart is easy to learn. Beginner developers can develop prototypes and apps with the framework. Moreover, one may find the necessary material like videos, docs, guides etc on the internet to make the learning procedure smooth and easy.

Although flutter is gaining popularity, it is still in the development phase, it still has an immature framework. It lacks more advanced features that enhance the capabilities of various operating systems. One has to wait until it can support foldable screens or dark system mode, system compatibility remains a question too.

Dart is not a fully developed language yet. Unlike Swift and Kotlin, flutter lacks in features or has less refined existing features which make it a cumbersome task for the developers.

When we consider the size of the app, Flutter apps are quite large and “heavy” to start with. In terms of occupancy, they take a lot of space and take longer time to download or update itself.

As flutter is the newbie in the mobile application development arena, there are no specific “guidelines” regarding steps to develop Flutter mobile apps. This might prove to be problematic for developers when building more complex software.

One of the drawbacks of flutter is that it’s framework and programming language undergo constant changes at times, making it tough to maintain the code for a longer period. There are even uncertainties regarding the future of flutter.

Is Flutter good for your business and developers? 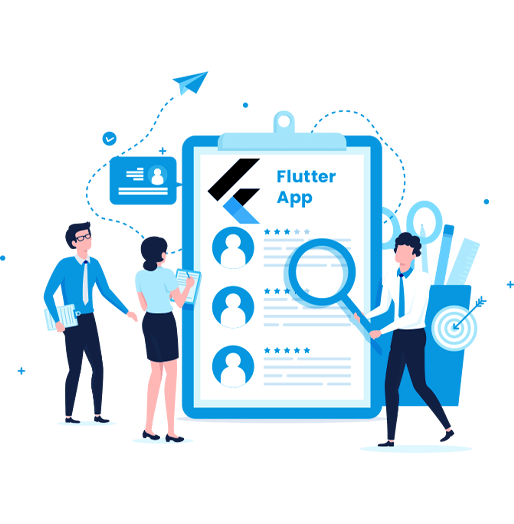 After knowing the flutter pros and cons, it can be known that flutter has many more pros than cons for both business and developers. One can save a lot of time and curate amazing, attractive, high performing cross-platform apps. If the company’s priority is to save time and cost and develop an app which supports both ios and android, one can surely opt for the flutter. Moreover, considering it from the developer’s end, the app-building procedure is faster, gets auto-updates, and one can easily find out errors if any in the framework. This makes developers work easy & fast.

How to Hire Flutter Developers?

Thinking to hire flutter developers for your firm? Here are certain points to be kept in mind –

As we know that Flutter is full of beautiful UI widgets and packages. While hiring Flutter developers, one must see their designing capabilities, whether a developer can design and create sophisticated cross-platform apps. A developer must be able to grasp the project requirements and find out bugs prevalent or possible if any.

Bugs & glitches slow the app speed and make it hang frequently. On detection of bugs by any QA manager, Developers must have the skill to fix the bug as quickly as possible.

This is quite an important aspect while hiring a developer. As there are continuous changes in trends and technology in the IT industry, developers are thus required to learn constantly and stay updated about changes in tools, framework, designs etc.