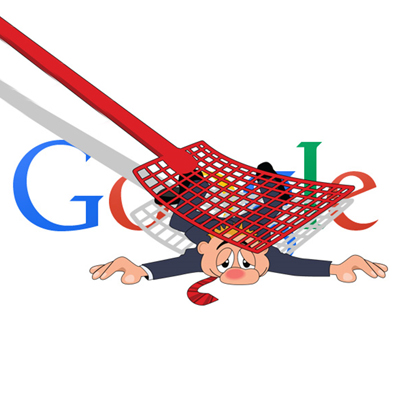 We are going to cover the below points in this guide:

Google always has its eye on fraudulent & spammers & if it finds someone indulging & practising such as illegal activities, the company will be applied punishment immediately, which is termed as ‘Google Penalty’.
While using black hat SEO practices like cloaking, unnatural paid-for links, doorway pages, spam or hidden links, one is bound to get penalized by Google. At times even if the transgression isn’t necessarily the company’s fault, they’ve to pay the penalty & abide by the penalty procedure laid down by Google.

Below are the 16 Big Brands that were Penalized by Google:

An example of link stuffing penalized by Google. To get an unnatural hike in traffic rate, Rap Genius, a famous US-based lyrics website allowed bloggers to stuff links into the content of their lyrics and in return, asked them to tweet about their website on Twitter. This was caught by Google and led to a 10 day ban, where Rap Genius didn’t rank for its name and suffered a big drop in its PageRank.
It should therefore be taken into consideration that links inserted in your content should be relevant and trustworthy, any unethical practice with it can lead to a huge penalty.

Back in April 2013, Google found Mozilla hosting a web page with 12MB of spam from 21,169 user comments. That wasn’t Mozilla’s fault as it had user-generated spam in its blog comments and forums. It was penalized by Google and the page was downgraded in rankings which ultimately made Mozilla remove the offending page.

Google penalized BBC in March 2013 for having unnatural links on a single page. The case doesn’t have any confirmation regarding the details but rumours suggest it wasn’t the BBC’s fault, rather it was an RSS feed scraper. Having caught by Google, the page was downgraded by in rankings.
Having Unnatural links are considered as fake and manipulative outbound links by Google. These fake links can upscale your website ranking for a short time, but it is unethical and you may get caught.

On being penalized by Google and no longer ranking for its name, as well as for many generic flower-related searches, Interflora never received any official reason for penalty.
Google had given a warning against “advertorial” content that doesn’t make use of no follow or other methods so that links in such content don’t pass along ranking credit. After getting certain links removed, Interflora penalty was lifted after 11 days.

Overstock suffered in its ranking and revenues due to penalty by Google as a competitor complained that it was offering discounts to schools in exchange for links back to the Overstock website. The links diverted to particular products, with very specific anchor text that helped Overstock rank well for certain terms like “vacuum cleaners” and “gift baskets.” Overstock’s penalty was lifted after two months.

An article in the New York Times published the details how retailer JC Penney was buying links to improve its ranking in Google. Before the publication of the article, Google had already penalized JCPenney.
After removing the paid links and showing it as a mistake by its SEO firm, JCP was able to top rankings in Google after 90 days.
Using the paid link scheme to boost your ranking will sooner or later get you penalized by Google.

Here’s another example of being penalized for paid links by Google. Back in October 2007, The Washington Post was selling links on their blog without following Google’s guidelines when included paid-for links. The paper’s PageRank value came down from PR7 to PR5 which was later restored after a couple of months.

For an improvement of their ranking in Search Engine result pages, British Motor Works (BMW) was using cloaking or doorway page techniques to hide code from a searcher or bot back in 2006, which came to be known by Google.
Google doesn’t entertain such illegal techniques and so it completely removed BMW from its index, with a huge penalty.
The website was completely removed from the search engine results for three days.
One might be ready to pay the penalty once Google finds your webpage or blog is guilty of using hidden texts and doorway pages stuffed with the keywords to manipulate search engine results. It is therefore recommended to use white hat SEO techniques for a proper ranking free from any penalty.

In March 2005, Google penalized WordPress for using doorway pages. These pages are also known as gateway pages, jump pages or bridge pages, ones that are specially optimized for targeted keywords and designed to rank high for a set of particular queries. The sole purpose of these pages is to trick the search engines and direct a visitor from a selected result to another, unrelated destination. These pages have very little value.
WordPress hosted more than 168,000 articles. These articles are about high-cost advertising keywords, written by a third-party. Google noticed these and then penalized for two days. As a result, WordPress didn’t rank for its name and its PageRank was brought down to zero.

To gain better rankings on Google, Search King, a small search engine at the time, practiced unethical ways to buy and sell links. Google noticed their activity and in September 2002 dropped Search King’s PageRank score from PR8 to PR4. In answer to that SearchKing sued Google over the decrease in October 2002.

The reason is unknown till date, as neither eBay nor Google has confirmed the details, but in 2014 the company received a manual penalty and an unspecified drop in rankings.

Another example of a black hat SEO technique which was penalized by Google was in 2012 when The Home Depot asked its partners to link to their site with recommended anchor text and additionally also suggested that these links could be hidden (i.e. using white text on white background, placing text behind an image). This resulted in a two-month drop from the first SERP for many of its product pages.

Ricoh.de. – A not so well-known technology product vendor got caught by Google for having used JavaScript to redirect genuine users to a landing page that would display a page that contained mostly images, and the page that was listed in the search engine results would be a page that would be crafted specifically for search engine spiders. This made it seem like their pages were full of interesting content, which was full of keywords that were purposely used to up its ranking.

It might seem unbelievable but Google penalized itself five times for breaching its own set of guidelines. In 2009, Google Japan started buying backlinks from different bloggers to rank higher on Yahoo search engine.
They claimed that their intention wasn’t to go against Google’s policies, but being on the incorrect side even mistakenly, they were penalized.

‘Newsday.com’, a popular newspaper in New York got caught by Google for selling crap and irrelevant links without using ‘nofollow’ attribute in the footer of its website’s homepage.
These links were found to be navigated to some irrelevant sites, like lung cancer, law firm and others, considered as spams as per the quality guidelines set by Google.
Howsoever big or famous your brand may be, selling spammy links to unrelated sites, sooner or later Google will surely penalize you.

– It is advisable not to overdo the advertorials and avoid including rich keyword targeted anchor text links.
-Avoid creating specific pages for search engine crawlers.
-Don’t purchase or sell links on your website, especially if you’re using rich keyword targeted anchor text links.
-Hire an expert on the subject of Search Engine Optimisation to avoid any mishap in your rankings.

What is Black Hat Marketing?

Black hat marketing is the type of online marketing that use of unethical strategies to promote online businesses which become illegal sometimes. These strategies are against the rules and use deception and manipulation to accomplish their objectives.

It might be, but we advice – don’t do it. On getting penalised from search engines, your website will drop down in the search results or it could be removed completely by deindexing all your webpages. Thus, your website will gain very less or no traffic. It will hurt your business’s credibility and Search Engine Optimization.

How do I report Blackhat SEO activities to Google?

You can remove the spammy backlinks with Google’s disavow tool to tell the Google that the low-quality sites are linking maliciously to you. You can file a complaint via Google’s webspam report. You can also report Black Hat SEO strategy through Bing’s content removal feature.